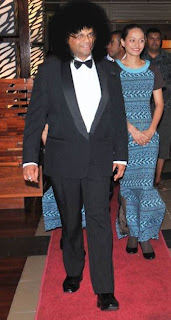 This week has been very busy with me standing in as DEPUTY PM.

Here I am at the Fiji Airways functions walking down the Red Carpet.

PM Bai was busy too saying goodbye to the troops he is sending to the killing heights in Golan, Syria.

He couldn't spend much time with the boys because he and Meraia were busy packing to go and see the other boys playing the rugby sevens in Russia.

They are taking PM Bai's favorite nephew Dan Gavidi to watch the rugby as a reward for being Fiji's best media censor.

I recall some months ago he was busy planning his trip to Russia but the Qorvis consultants said it wouldnt look very good if he was going to just watch the rugby so they suggested that they set up some meetings with Russian officials so the whole trip would look official then he could take whoever he wanted. 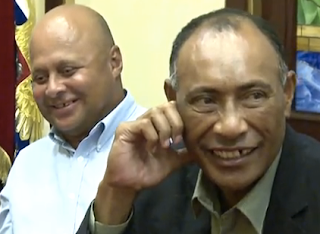 I of course agreed this would look much better holistically and suggested he should reward his most loyal Ministers with the trip to watch the rugby. I suggested this list as :

Naupoto and Foxy tweeted me this picture yesterday from Russia.

I must recommend they see the dentist as soon as they get back as they look like they attended the same fight in the village - not a good diplomatic look.

I was also very busy this week lecturing my Special Administrators  specially appointed by me .

I had to make an example of those native administrators that were questioning my authority by sacking a few of them last week.

Here I am with the latest line up of Fijian administrators.

And I must mention my presence as CHIEF GUEST in the red chair in my capacity as Deputy PM of course at the "Kaise Baat" function (see picture below). 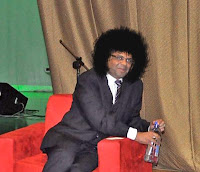 Also in the interests of transparency and accountability, I have enabled all government emails to go through my office portal, and I discovered today some kakase emails which have concerned me greatly.

In particular, I have found that Sharon Johns from Ministry of Information is continuing her correspondence with Grehm Davis from Qorvis despite telling us that she has fallen out with him, so I will be having a discussion with her in the new week.

What is very insulting is a video that she has made starring our PM Bai, which I am going to have to inform him about.

I reproduce her obtuse email here you for all to see .

In the middle of all these happenings, FIJI TV have been pestering me for their license, so I have let them know they cannot push me around until I decide. Isoa Kaloumaira was the most annoying of the Board so I have told Padam that I want him gone. Insha Alla.

Have a nice weekend and make sure to cheer our boys in Golan Russia this weekend .