I have had a very busy couple of months acting as PM of Fiji, whilst PM Bai went on his very VIP trip to Russia and the Solomons, and then to Hong Kong and a couple other places -  like mine, his schedule is so busy I have lost count where he is most of the time.

I have also been immensely busy pontificating over my new Constitution which is being spun to suit my vast interest in the holistic management of the Republic of Fiji and its people. And of course PM Bai's interests too.

Part of my duties as PM was to officiate at the Climate Change Rountable at the Hotel Sofitel, Nadi in July and I also opened some cave for the natives at Volivoli as well as the usual round of cocktail parties, Accountants Conferences and concept education seminars for the military men who are doing their best bending to be civil servants. 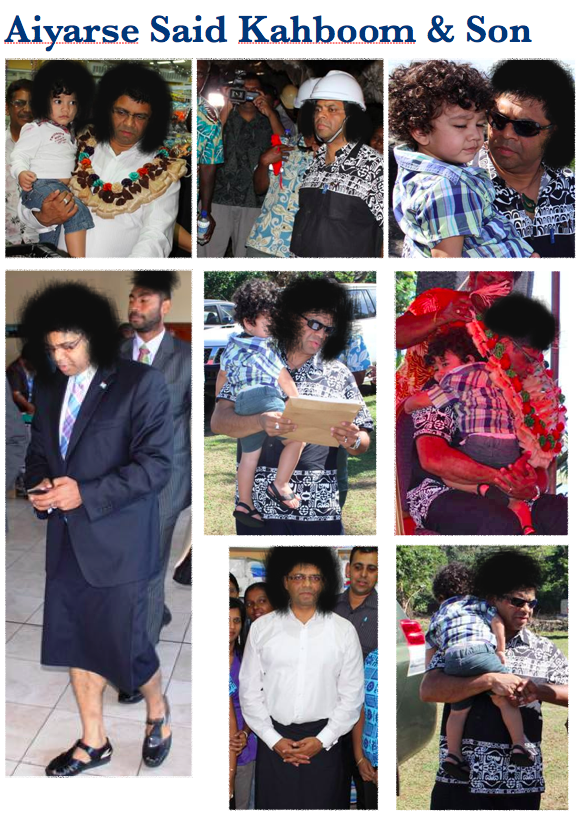 Lately I have received much praise from my staff when I attend to official duties in the native garb pronounced "sooloo vaa kay tongue ga" (see pictures).

In addition I have been preparing the way for elections too and taking my son with me on all my trips has been a sure winner as I have found the natives gravitate to small children and I present a convincing picture of being a good family man.

Which of course ensures I have their complete attention at all times.

As I have so much hate mail, my son guarantees that any sniper will think twice.

PM Bai came back from Russia acutely tired from being forced to drink heaps of vodka from the loss of the Sevens there by the hard drinking Russians who he couldn't tell apart as they all looked the same.

I have the same problem here in Fiji telling all the natives apart when I was doing village trips. My wife doesn't go in the sun even though she is a native. She is very fair in colour so I can tell her apart from the others, especially in her burqa.

My staff in the office say there is a curse on the team and that PM Bai should not go and watch them. I told them to go back to work or they would be sacked, just like I sacked all those Council administrators on the Western side.

However I am pleased to say that he arrived back in time to farewell the troops whom he promised the Russians he would send to the Syria to support Assad even though they are going heavily disguised as UN contingents.

This of course in return for military aid, new guns and ammunition to quell any opposition to the Fiji Elections in 2014. The UN of course will pay our boys and ourselves so we can keep money in the kitty for the military to carry on guaranteeing our safety.

Now I must attend to the nation-wide promotion and next video featuring my brand new constitution which I shall talk about in my next post.